The Brexit Express comes to Linköping! 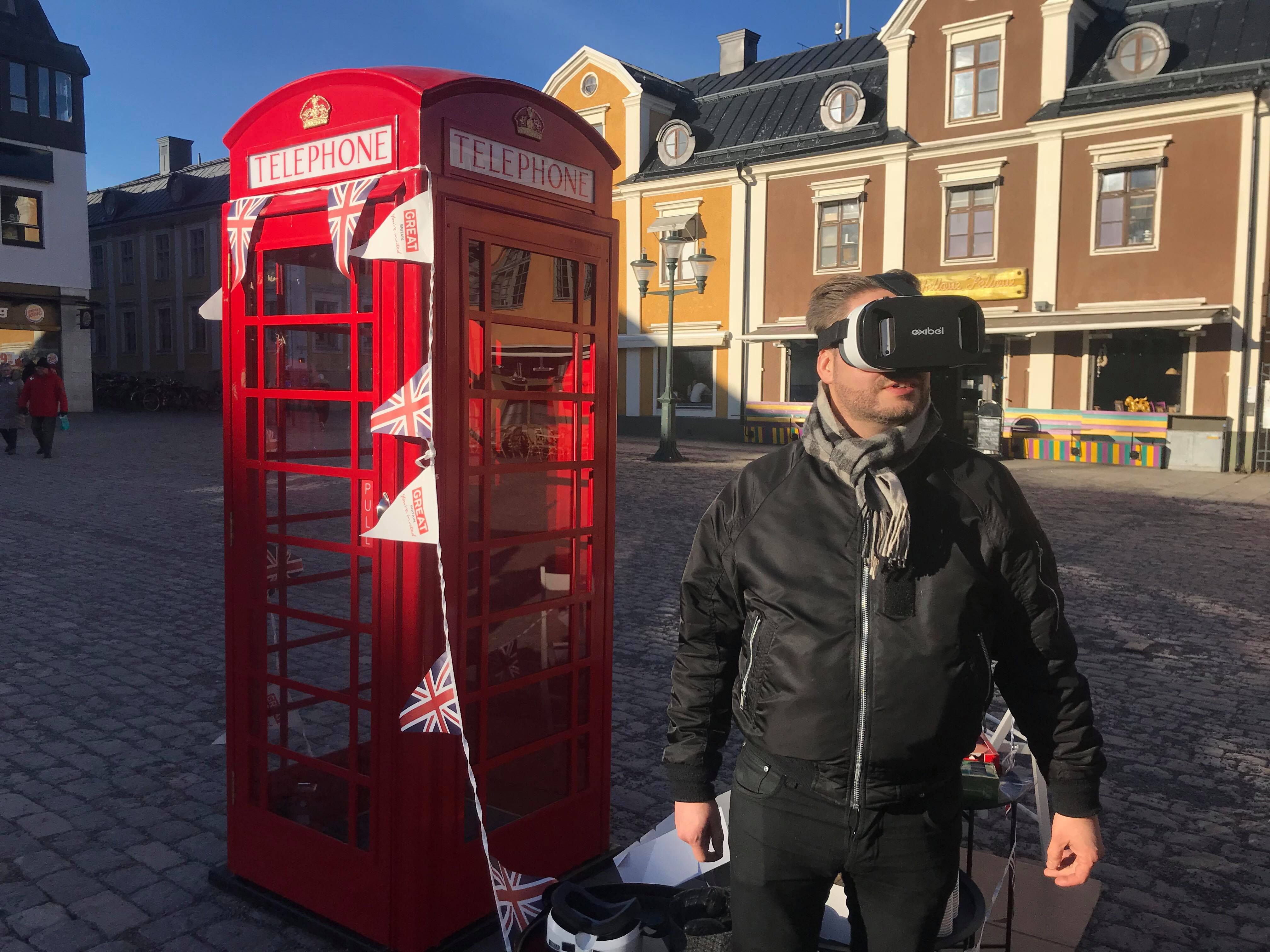 Last night the Brexit Express steamrolled to my home town, Linköping. The UK Foreign Office are on a PR offensive trying to reassure businesses, expats and potential tourists that even though the UK is going down the drain at speed, the drain it is going down is still a world leading drain. Being the laughing stock of the world is all part of our famous sense of humour.

The PR push started in the morning with a half-hearted effort to woo tourists to London. A mocked up red telephone box in the middle of the main square was the best that they could come up with. Nobody had told the embassy that they would be sharing the square with an even bigger promotion by the Swedish Probation Service whose truck with the words ‘Leave Your Life Of Crime’ somewhat overshadowed the phone box.  Anglophiles were invited to enjoy a virtual reality tour of the capital, sip on tea and nibble on shortbread. Unfortunately, on the same day, footage was emerging on Twitter of a Swedish tourist being abused by a mob of yellow vest wearing knuckleheads who looked like they’d been banned from Wetherspoons for bringing down the tone of the place.

My friend David tried the VR headset (pictured). To help him with the full London experience, I kicked him in the nuts and stole his bag.

In the evening, the UK Ambassador was to address worried UK subjects who live in Linköping. The meeting was at the Town Hall, a place where important decisions are made by our local politicians on an almost occasional basis. Lars Vikinge, the mayor, greeted us and welcomed His Excellency, The Ambassador, David Cairns. No judgement on either Vikinge or Cairns, who are both pleasant enough gentlemen, but being in the presence of both the representative of the UK government and the figurehead of Linköping Kommun felt like witnessing the perfect storm of ineptitude and incompetence. It’s not the Ambassador’s fault. It’s Brexit. And it’s not the Mayor’s fault that Linköping is so… well maybe it’s partly his fault.

The crowd of angry Brits had been given a good twenty minutes to build up to a simmering rage, and needless to say Lars Vikinge completely misread the mood. He kicked off with a couple of jokes which didn’t really land. Then waffled on with a brief history of the building, which apparently used to be a school! He would have gone on, but was interrupted by an elderly Mancunian cracking his knuckles. Lars tried to win the crowd back by telling us that he felt an empathy for our situation as his wife was from Norway, a country that is also not a part of the EU. This didn’t help. It was a bit like reassuring the crew of a rusty, rudderless ship that is about to sink in shark infested waters, that even though they can’t swim it’ll be OK as he has a friend who has a heated swimming pool with an inflatable dolphin.

So on came the Ambassador. I watch these things with the critical eye of the stand up comic and to his credit he grabbed the mic confidently, but you could see in his eyes he didn’t trust his material. We’ve all been there and I’ll be honest, I admired him for turning up in the first place as that’s not a gig I’d have taken on. I guess he’d sworn some kind of allegiance and this was his moment to fall on his sword for queen and country and to honour the result of an election from two years ago that was probably swayed by Russian influence and definitely driven by lies on buses and promises that couldn’t be kept.

The nerves must have got to him as his opening remarks were to say what a pleasure it was to be in Norrköping - An easy mistake to make and close enough, as Norrköping is only 30km away. But not a great way to win over an already hostile crowd. He clawed his way back and pulled out the full arsenal of platitudes and euphemism. My favourite was that  “The UK would leave the EU in an orderly fashion” as though we were disembarking from a National Express coach for a fifteen minute toilet stop on the M1.

Then he opened it up to questions. There were some good ones. A highlight for me was one bloke referring to Boris Johnson as “That fucking clown BoJo”. Nobody, not one person, found any reason to disagree with the epithet.

It was obvious that while there were many questions, the Ambassador had very few answers. In fact the Ambassador’s entire evening could be summed up with two phrases: “I don’t know” and “That’s probably a matter for the Swedish government”. It was almost as if he lacked any expertise on the subject at all.. Which of course, in post expert Britain, makes him perfectly qualified.

So roll on Brexit. There’s just over a month to go. And when we get there, please do your best to leave in an orderly fashion