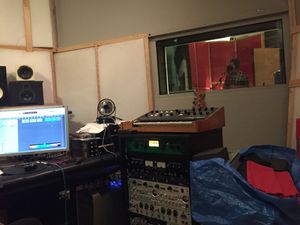 I'll start with the second job. This was a long e-learning module on ethics in business, complicated questions and legal jargon about avoiding conflicts of interest and corruption. Two hours in the studio to deliver 30 minutes of recorded material. ... OK some of the longer legal terms needed a couple of takes, but on the whole a relatively smooth recording.

The first job was at a small studio under a viaduct in Kungsholmen in Stockholm. No windows, no mod-cons, egg boxes on the wall, a few dusty quarter inch tape machines lying around that were either there for effect or possibly left over from when the studio first opened and to top it all, there was no milk in the fridge for the coffee. It was perfect. This was an short independent animation for a director call Simon Appel - From what I've seen of his stuff it looks pretty cool and he comes across as one of these frustratingly creative people who can take a tiny idea and make it huge.

I was working with the storyboard and the basic set-ups were there, but Simon pretty much gave me a free hand to muck about and play with the ideas and the characters. I think I managed to go through the entire cast of Scorsese's Mean Streets to give life to four slices of pizza.

I'm looking forward to the final result, but please do check out the two directors' links at the bottom of this post. I left the studio feeling great and with a desire to do more silly voices for more animations .. So if you're reading this, Pixar, you know where to find me.

I'm not saying I prefer one style over the other - If you have an e-learning module that needs recording or a technical description that you want me to get my tongue around, then don't hold back, I'll record it for you! But what I am saying is that recording for animation where your voice, improvisation and jokes will potentially steer the look and feel of the final film is very rewarding indeed.

There aren't many jobs in this life where you get paid for mucking about with silly voices, imagining what, for example, a slice of Hawaii pizza might sound like and knowing that the more you make the people who are paying you laugh, the more seriously you are taking your job.

You can listen to my voice in action on some older jobs on the 'voice' page of my website. Meanwhile here are the animators links: