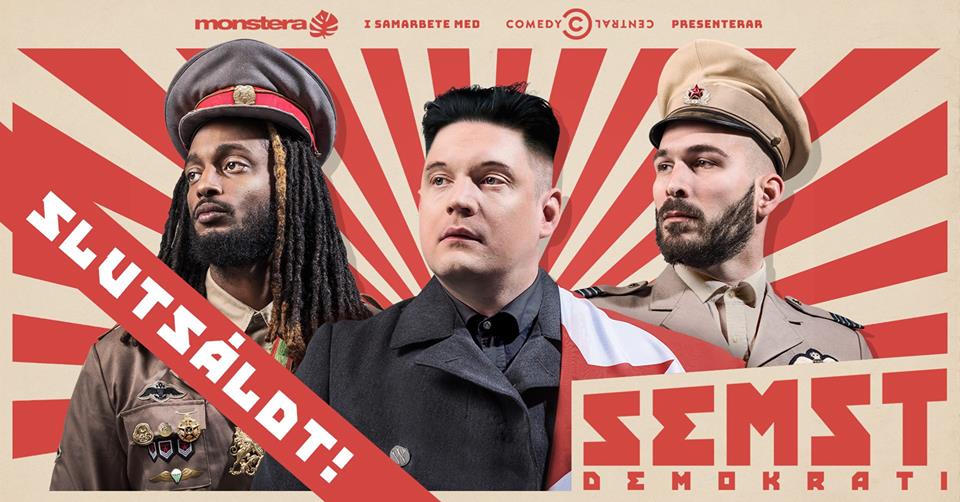 Friday was largely dedicated to spitting out the words ‘Linköping Bloody Kommun’ through gritted teeth.

For accuracy, I should say that this wasn’t just an average day to day ‘Linköping Bloody Kommun’ swearathon - When you live in Linköping and do anything that could be considered remotely cultural, you do tend to find yourself using the name of the kommun as an expletive. To be fair, if you have anything to do with sport, education, healthcare, traffic or any other facet of the minutiae that make up the fabric of society in Linköping, you would be forgiven for waking up in the middle of the night, with fists clenched, eyes bloodshot, violently expelling the words ‘Linköping Bloody Kommun!’

Admittedly, putting on comedy in an average sized town is not up there in humanity’s most important occupations, even if said average size town has the stated ambition of being Sweden’s third biggest event city. But this was where I found myself on Friday night, being in charge of a night at Sagateatern, Linköping Kommun’s city centre venue.

Having promised myself never to use Sagateatern again for a whole list of reasons, which could be summed up with the image of one of those poo poo emojis, I found myself in the services of the very nice people from Monstera with the task of running a night at Sagateatern to put on the success express that is SEMST with Ahmed Berhan, Jonatan Unge and Branne Pavlovic. (With my old mate Adeel Faqih in support/replacing Aron Flam)

So I go to pick up the keys for the theatre and double check that there are mics and leads at the theatre. The answer is, of course, that there was no equipment in the theatre. I managed to blag some leads and mics eventually, but it was genuinely like getting blood out of a stone…. Having to explain that you need a lead that is longer than one metre. I don’t mind being a bit of an arsehole. That’s why Monstera hire me, because I get stuff done, but I end up being an arsehole with people that are nice and have no desire to be at the receiving end of my arseholery, people who have no idea about the technical aspects of the theatre; and neither should they as the rest of their job involves sitting at the desk of an art gallery.

Needless to say, at the theatre, nothing worked and with some frantic texting and phoning and even bringing in my own sound equipment, we eventually got the sound working after two hours of super stress and thanks entirely to an eleventh hour stroke of genius from Dutch IT prodigy, environmentalist and boat owner, Take Aanstoot who must have performed some kind of voodoo on the sound desk that had confused three other musicians and sound people that were left utterly perplexed and spitting the words ‘Linköping Bloody Kommun’.

We got it fixed, but even the best the sound system could do wasn’t great, but the audience probably didn’t notice. Partly because the show was so good, but partly because they would have been more pissed off by the lack of beer in the venue, or the long queues for the only toilet, or the fact that the place has a general air of 'Linköping Bloody Kommun' about it.

SEMST is fantastic. Cutting edge is rarely the right way to describe comedy, but I think that the SEMST gang are pretty close. They are doing stand up that is clever, shocking and pushes buttons by going against the grain of the average idea of what is acceptable in comedy in Sweden. They have a take no prisoners attitude, which is intimidating, but also refreshing in the often huggy, self-congraulatory, saccharin world of Swedish stand up.

We had a couple of beers afterwards and sat outside on the first mildish night of the spring. It was nice to unwind and be rude about other comedians. As I cycled home to a nice warm bed, the nightmare of Sagateatern and Linköping Bloody Kommun behind me, I said what I say every time I do anything at Sagateatern: "Never Again!” Then I just shout “Linköping Bloody Kommun” at trees, or the moon, or anyone who happens to be in earshot.