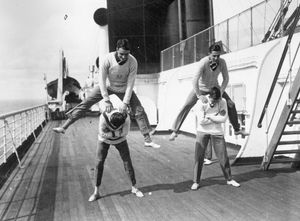 So we are all agreed. Sport is good.

But please, as the new sport season kicks off, spare a thought, just for a moment, for the parents of the kids who do sport. Parents like me.

I’ve got a kid who plays a game called Innebandy - A game that is hard to describe. It’s like hockey, but indoors and without the charm of the St. Trinian’s films. And it’s played by very blond, very Swedish people, usually with some kind of sweatband thing going on in the hair and on the wrists. The other parents turn up in their white-picketed Volvos and talk about robot lawnmowers. It’s that kind of sport. And my kid plays it.

Last night I had to go to the parents meeting for the team. It was held in a changing room at a school that stank of sweat. By which I mean, the whole school stank of sweat. The changing room stank of drains and deep heat. And sweat. The parents sat around listening to the new coach giving a run down of the season to come. He was like a prim and proper Kenneth Connor in Carry on Cruising, replete with the awkward nasal chuckle.

I tend to zone out a bit at these meetings. It could be the poor ventilation of the changing rooms or It could be the cod motivational speeches which make me light in the head.. They bang on about how they want to win their matches while at the same time stressing the importance of the playing of the game being more important than the winning or the losing.

I was busy staring at an unidentifiable brown stain on the wall, when something grabbed my attention and I was brought back to the room. A parent had interrupted and had asked whether the boys should be forced to shower after training. The majority of us were ambivalent, praying for the meeting to finish, but two parents seemed to be quite passionate about the subject, one for obligatory showers, the other against. Both looked to the trainer to take their side.

Eventually, to move the discussion on, the trainer uttered the following words: “I don’t want to be a Nazi when it comes to showers”