The towel is mightier than the sword 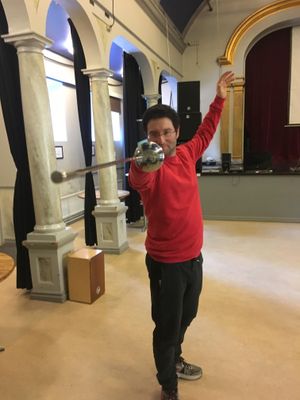 I’m in pain. My limbs are aching.

I can’t be blamed. I’ve been in a fight.

It was a series of fights. It feels like I spent the whole of yesterday fighting. In fact, pretty much everyone I met, I fought.

And I was armed.

Yesterday was no ordinary lazy Sunday. Yesterday was Stage Fighting Workshop Sunday! It was like Linköpings very own Fight Club!  And the first rule of Fight Club is… blog about it!

Fight Club started badly for me. I was slightly late. I’ve always been a little lax about time keeping and I honestly arrived no more than five minutes late! But I now know that when a workshop on Stagefighting, in Sweden, run by a Dane, is advertised to start at 9am, it starts at 9am. On the dot. This is the second rule of Fight Club: Don't be late.

I wasn’t very late, but I was late enough to miss the first part of the warm up. The part where you warm up your legs. This shouldn’t have mattered. You never see Zorro stretching his hamstrings before whipping out his trusty steel and getting down to some serious swashbuckling.

My upper body got the full warm up it deserved, and we got down to business. With a Rhumba.

Very pleasant, very safe or so it seemed…. But given the wrong partner the risk of injury can range from squashed toes to slapped faces. The reason for the Rhumba is that stage fighting is like a dance, a choreographed series of moves that need to be followed. You can improvise, but you and your partner must have a damn fine-tuned understanding of each other before you do. Just because the spirit takes you, doesn't mean you can start adding leaps and twirls unless your partner knows exactly what's going on. Mixing a Cha Cha Cha with a Tango is one thing, but an unexpected slash with a sword at head height can be slightly more painful.

We were given our weapons. Fencing swords with a blunted tip. A weapon that I always thought was called a foil, but that we called rapiers. It’s never acceptable to to make rape jokes, but my mind started working overtime on making rapier jokes. But just as I thought of a good one, someone else got in there first. Foiled again.

And we began working out small choreographed fights, we swished, we swashed, we slashed and and we cut. The room was filled with the sound of tchic-tchac tchic-tchac as we became a gang of Sunday morning Errol Flynns, albeit slightly less slick, pencil moustache free and in jogging pants.

Then came the move which was my undoing. The lunge. A move that we nearly didn't learn at all as when the instructor Marianne said "Now we'll do the lunge" in her Danish accent, most of us made a move for our packed lunches. What a difference pronunciation makes - Lunch is easy, a lunge can be painful.

So we lunged. Swords extended bodies low to the ground. The lower the better.

I did a few of these then started to feel it in my hamstrings, and my thighs. And wished I had arrived five minutes earlier to get those legs warmed up. I fought on, my face contorted with pain. My fellow combatants were impressed by my acting skills, portraying genuine agony after being defeated in a duel. .. They were less impressed when I kept the expression after the fight was over and hobbled around the room, whimpering.

I did some extra stretches and was back in the game. After lunch we added to our armoury with the most fearful weapon of all. The hand towel! This became an improvised cloak, which we twirled, flicked and used to parry blows. And we learnt the most important lesson of all! The towel is mightier than the sword!

I had a great day, and would love to do it again! Thanks to Marianne, the teacher who came all the way from Denmark and did everyone a great favour by speaking in English and teaching us the third rule of Fight Club: There's no such thing as a free lunge.