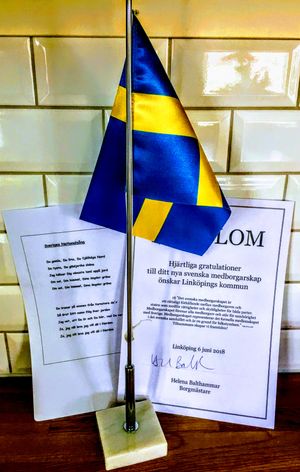 In the past, I may have inadvertently ejaculated barbed comments to the effect that you never get anything from Linköpings Kommun. I take it all back. I retract all previous allegations. Last Wednesday, on Sweden's national day, Linköping Kommun gave me fika, a small flag and a certificate (Or a 'Sir Stifficut', as they were known in Birmingham). I felt shame that I had ever been rude about the kommun and a warm glow of pride came over me, although in retrospect that warm glow may have been because I spilt coffee on my trousers.

My family and I had gathered, along with other New Swedes of every size, shape, gender and colour to be officially welcomed into the fold. We got to meet the mayor and shake her hand. I made the mistake of trying to make a joke in deadpan, which fell flatter than a steam-pressed pancake. The mayor and I stood awkwardly looking at each other not quite knowing what to do next until she snapped out of it and vigorously grabbed the hand of the next New Swede in line. Behind her official exterior, you could see she was praying that letting me into the country hadn’t been a terrible mistake. Sweden is facing a difficult future, the last thing it needs is so called comedians who tell jokes at inopportune moments, and what’s more, jokes that aren’t even funny. I felt for her: Shaking hands with the likes of me cannot have been the reason she entered politics.

Fika crumbs on our chins, and high on kommunal coffee, we sat in the shade of the poorly constructed open air theatre of Gamla Linköping. Through the inadequate kommunal sound system, we were treated to a prime example of Swedish oratory. It was the usual kind of thing: “Blah blah blah… Fantastiskt land… blah blah… fåglarna kvittrar… blah blah … som Tage Danielson skulle ha sagt… blah blah… “ .

We were told that with Swedish citizenship comes responsibility. This came as news to me and I’d have though twice about signing if I knew there were conditions. The crescendo of the speech pointed towards the quote at the bottom of the certificate - “Tillsammans skapar vi framtiden” (Together we create the future) - A quote that felt a little rich given that we were sitting in a botched renovation of a theatre from the 1950s in the living museum of Gamla Linköping where people wander round in period costume selling pegs and hitting hoops with small sticks for the amusement of Russian tourists.

Finally our attention was drawn to the photocopy of the Swedish national anthem which had been printed in the font Comic Sans. We would sing it with one rousing voice as soon as the mayor had handed out the flags and the certificates. Names would be read out one by one and we were to go up and collect, shake, smile and leave.

There were 135 names to be read out. A wave of disquiet spread through the audience. 135 names. One Hundred And Thirty Five names… Internal calculations were trying to work out how long this would take. 135 names, one after the other. We would never leave. What evil form of torture was this?

The panic in the crowd began to grow. There were people there who had escaped civil war, famine and Donald Trump, who were genuinely weighing up whether Swedish citizenship was genuinely worth sitting through the reading out of 135 names. A couple from Burundi started weeping, audibly, while a computer programmer from Belgium made a break for it and tried to leap over the fence that surrounds the theatre.  He made it halfway over,  but got a foot caught and hung there twitching for the rest of the afternoon. We all knew he was there, but not one person dared acknowledge the horror, concentrating solely on getting through the 135 names and praying to whatever deity they could evoke in this godless land of Sweden, that their name would be somewhere in the first half.

The names were mumbled through.... And eventually an approximation of my name was quietly read out. I missed it, but a good poke in the ribs let me know that it was my turn. I jogged up on stage, high-fived the mayor and showed my bottom to the crowd. I waited for the applause to die down and began a slow chant of 'One of Us! One of Us!' from the 1930 Todd Browning classic Freaks, encouraging the audience to join in. I’m a stickler for tradition.

The press was there to capture the moment and asked why I had chosen to become a Swede. I put it down to one person, Boris Johnson, but really should have also thanked Nigel Farage, Michael Gove, Theresa May and the swathes of idiot politicians in the Conservative party for going ahead with Brexit and the swathes of even bigger Corbynista idiots in the Labour Party for allowing them to go ahead with Brexit. But in the event it was only Boris that got the credit in the local press. Typical Boris.

So now I’ve got dual nationality - UK and Swedish. Hedging my bets? Perhaps, but I’ve always quite liked being a European, and not felt a great urge to pin my colours to a single flag. Nationalism, historically, tends to carry a bit of a stink.

So there we have it. And as we say in Sweden: Merci beaucoup, Boris Johnson. 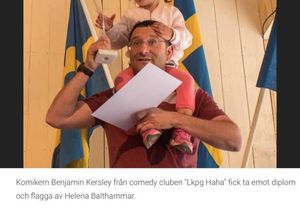 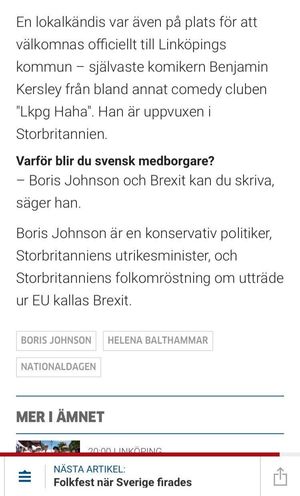