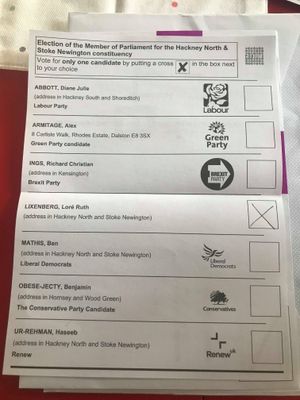 It’s election time! And across the country, the people of Britain are struggling with which disaster zone not to vote for… It’s a tough decision...  I’ve been marching round with banners that say #nottory and #nevercorbyn. Sometimes I like to mix it up and swap them over to #nevercorbyn and #nottory

I’ve  already cast my vote by post in the constituency of Hackney North and Stoke Newington. And I am pleased to announce that I have put my cross firmly behind the vocal performance artist Loré Lixenberg.

Apart from her most appealing credentials of being ’Not Diane Abbott´, she’s the only candidate on the paper who gives no address and no party and there is very little information about her online. I even looked up her odds on Bet365 and THEY DON*T EVEN LIST HER, she that much of an outsider!

I found a poorly updated website and a tumbleweed filled Facebook page. She’s my kind of politician! Say nothing, deny nothing, confirm nothing!

After a bit of googling, I got the thumbs up for Loré that I needed - She was one of the original gang that developed ‘Jerry Springer - The Opera’, the musical which according to some tabloids contained over 8000 profanities, and which I very much enjoyed watching in the West End back in the early noughties! So for that alone she has my vote. Then I found her ‘statement of intent’, which included the following:

“I promise nothing at all” … Finally a politician with a truthful message!

I also found this party political broadcast, fittingly filmed under the Arc De Triomphe in Paris. Her election promises include “A silent retreat for all politicians” and “musical activities of some sort”. How has Lixenberg not been considered a serious challenger?

So there we are. Vote cast. And this means that you can’t now blame me for the inevitable disaster of a Johnson/Corbyn (delete as appropriate) government.

Footnote - If Lixenberg eventually becomes Prime Minister and actually turns out to be the leader of some kind of Death Cult that believes in compulsory Zumba lessons, the banning of apricots and the beheading of all teddy bears, then I apologise in advance. But for now, and on election day, Loré Lixenberg has my full, undivided and loyal support!

Let's finish this post off with a short clip from The Houses of Parliament, sorry, Jerry Springer The Opera .. And remember, in the words of Jerry himself -

"Take care of yourselves, and each other"